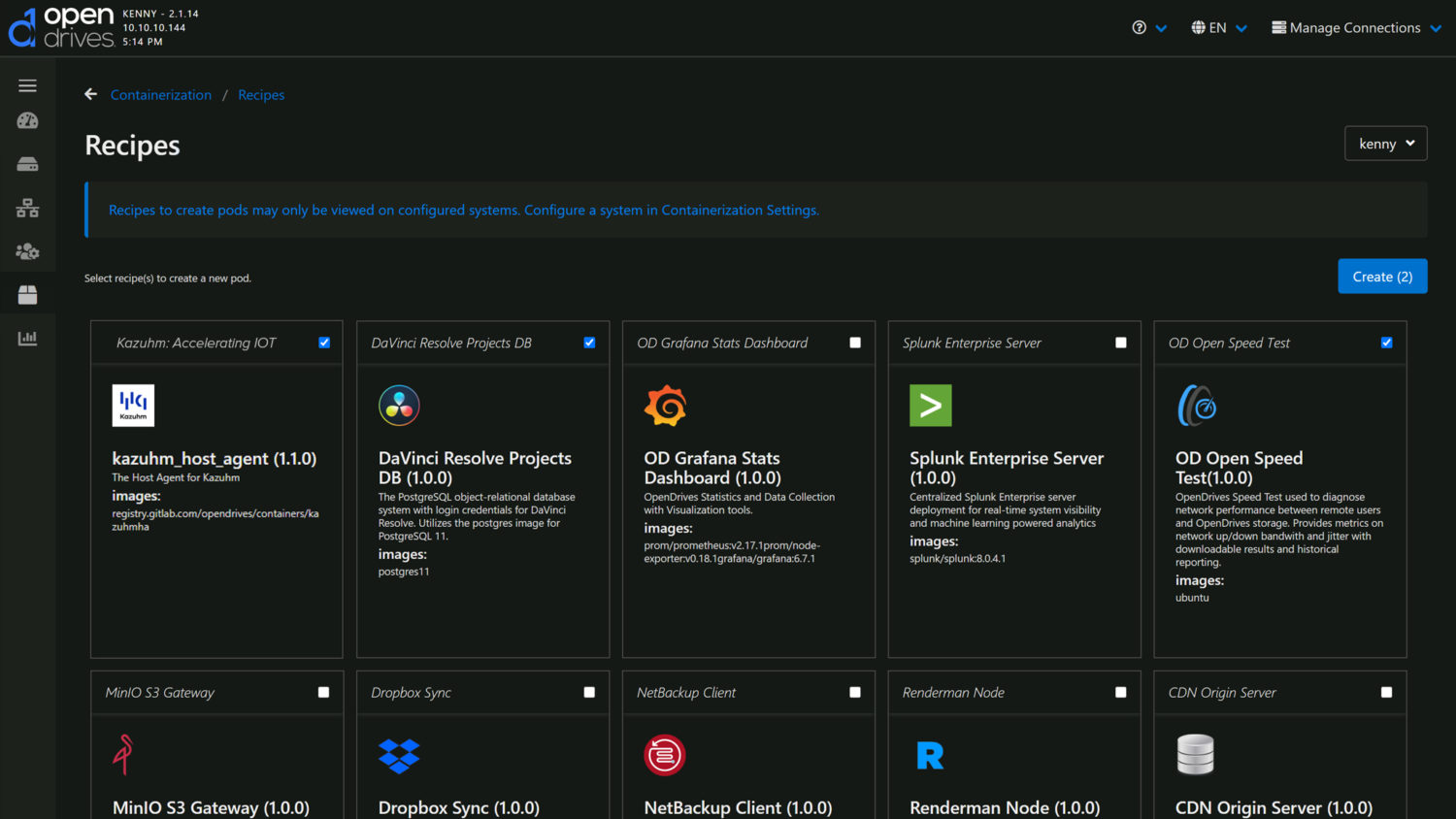 March 24, 2021  — OpenDrives, the global provider of enterprise-grade, hyper-scalable network-attached-storage (NAS) solutions, announced today that it has partnered with Kazuhm, the distributed computing technology leader that enables IoT and other enterprise data to be processed with ultra-low latency and cost. Joining the OpenDrives containerization marketplace, also announced today as a new feature to OpenDrives’ centralized management software platform (Atlas), Kazuhm allows end-users to activate and integrate compute nodes on their network regardless of operating system or type of device.

“At OpenDrives, we’ve taken a storage-first approach to compute by bringing containerized applications and automation directly into the storage infrastructure. The introduction of ‘pods’ and ‘recipes’ simplifies deployment and management of these containerized applications, thus reducing complexity and increasing performance,” said Sean Lee, Chief Product and Strategy Officer at OpenDrives. “By partnering with best-in-class distributed compute technology leaders like Kazuhm, who share our same values in ensuring ultra-low latency and cost, enterprise-scale organizations can run multiple workloads in isolated virtual environments as close as possible to the data to optimize performance.”

“We are extremely pleased to have the opportunity to be the first OpenDrives partner to deliver our distributed computing capabilities as an integrated feature of the Atlas platform,” said Andreas Roell, CEO of Kazuhm. “OpenDrives’ containerization marketplace enables us to expand our reach to a new set of customers that have not yet experienced the cost and performance benefits of running containerized workloads on their own on-premise devices.”

Kazuhm is available through the OpenDrives containerization marketplace, a rapidly growing ecosystem that, through a robust API, allows customers to load recipes on the compute module without interfering with storage performance and further power OpenDrives’ scale-up, scale-out infrastructure. OpenDrives’ software dashboard, also included in the latest Atlas software release, unlocks deep insights into all analytics running on the OpenDrives system, in real-time, with an easy-to-use graphical interface.

Additional applications in the OpenDrives containerization marketplace include: DaVinci Resolve Project Server, as well as common agents for services like Grafana Analytics and Splunk.

OpenDrives is a global provider of enterprise-grade, hyper-scalable network-attached-storage (NAS) solutions. Founded in 2011 by media and entertainment post-production professionals, OpenDrives is built for the most demanding workflows, from Hollywood to healthcare, and businesses large and small. OpenDrives delivers the highest performing solutions to match individual performance needs, even for the most robust, complex and mission-critical projects, on-premises and into the cloud. OpenDrives is headquartered in Los Angeles, CA. To learn more about OpenDrives, visit www.opendrives.com.